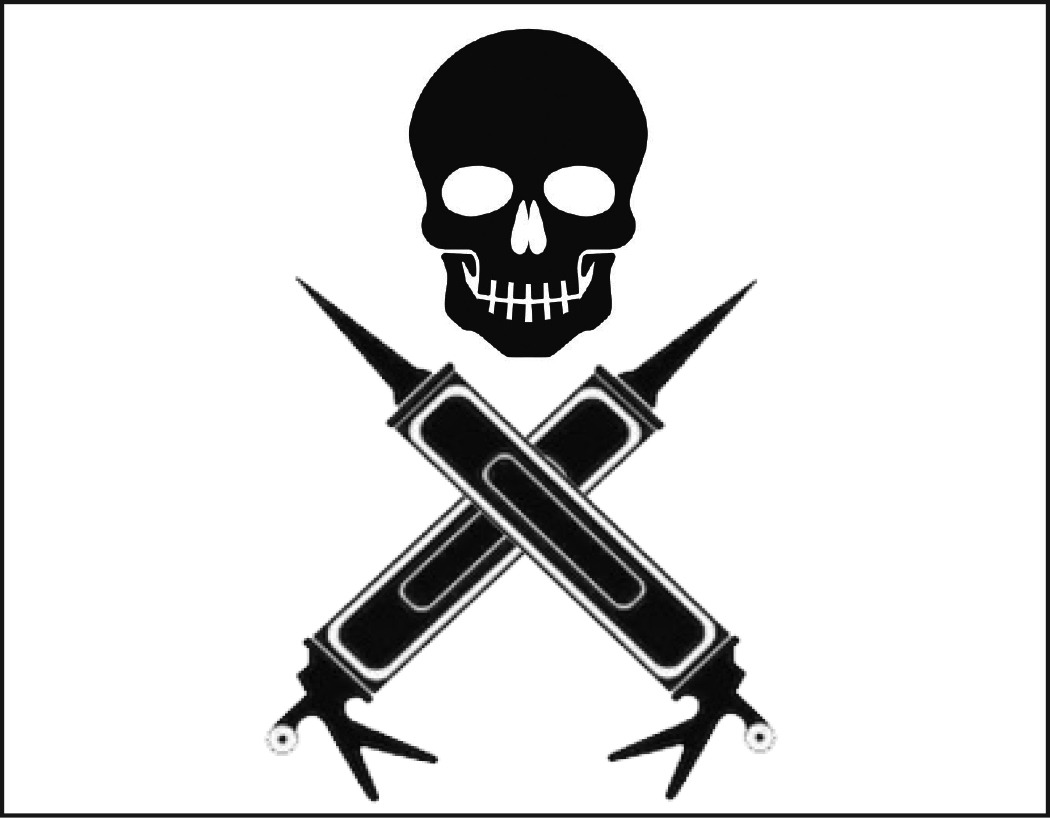 Not an Airtight Case

In 2017, the Adhesive & Sealant Council estimated that 446 million pounds of caulking and sealant was sold to the U.S. construction and retail consumer market.  This is roughly equivalent to about 900 million tubes of caulking a year.

Caulking is rarely noticed in the context of a home.  However, it has at least two important environmental attributes.  First, it saves a great deal of energy.  Though homes built today are much more efficient than new homes built in the 1970s, in that era, the average dwelling had about one square yard of cumulative cracks and openings where energy used to heat and cool the home was lost.  Caulking and weatherstripping prevent a noticeable percentage of this lost energy, along with the harmful environmental effects from this energy’s production and consumption.  Second, these materials create barriers to keep bugs out, protecting health while also preventing the greater use of conventional pesticides, which are harmful to people as well as insects.

However, less attention has generally been paid to the environmental effects of the material itself.  Unlike other building materials such as paints, which have improved over time or that allow the use of more benign product alternatives, relative environmental progress in caulking and sealing products is not as advanced.

Various caulking and sealant products in the U.S. employ a number of chemistries.  Almost all of them are based on petrochemicals.  This author was not able to find any caulking products on the market at the time this article was published that were even partially plant-based.  The more benign products on the market either use minerals or least-toxic acrylic polymers as their main ingredients.  (This contrasts to other building product categories such as paints and flooring, where a number of alternative products are partially or totally petrochemical free.)

In addition to the chemical base, many caulking products contain a number of additives that can adversely affect health: toxic solvents that emit VOCs (Volatile Organic Compounds); biocides; phthalates; organotin catalysts; isocyanates; antifreeze; and flame retardants.

This article will first discuss the generic types of caulking and sealants, ranked by their relative health effects. 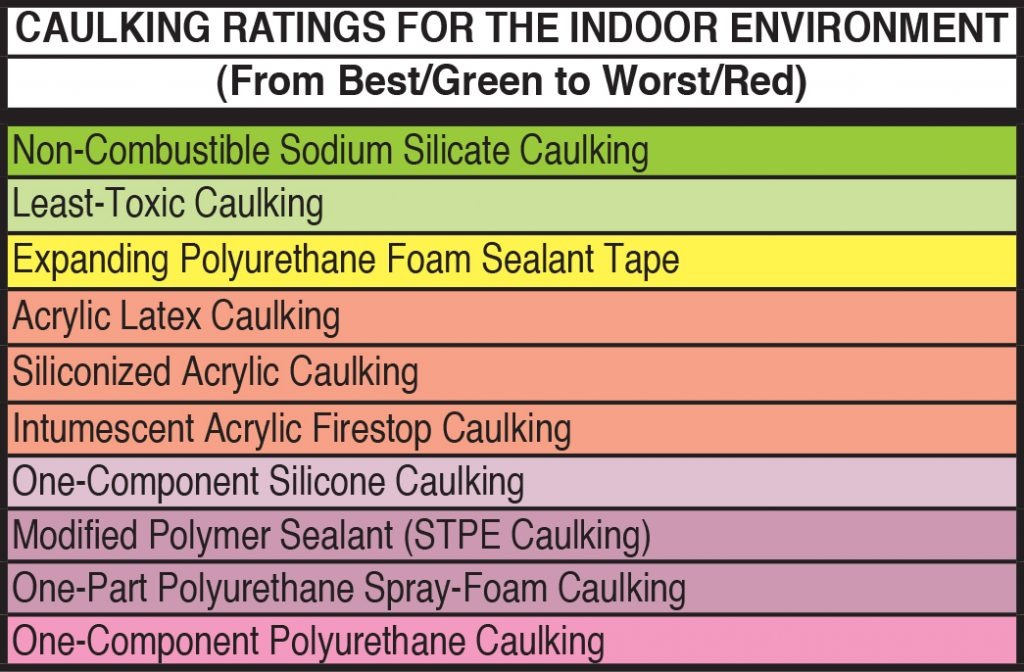 Following this, there will be a chart of least-toxic products.  Most of them cannot be labeled “green,” but at least they can be considered “gray” (as opposed to “black”).  Additives in these products will also be discussed.  Not all products will have all of these additives, and while sometimes these additives will make up noticeable percentages of the products, other times they will only be present in small amounts.  So look for the products that are the least contaminated.

Non-Combustible Sodium Silicate Caulking – This water-based product, also known as “fire caulk,” is largely mineral based.  Common ingredients include various kinds of silica, kaolin clay, and ferric oxide.  While its health effects are relatively benign, its utility is limited. It is a mortar caulk used for fireblocking by sealing penetrations around ducting, and electric and plumbing penetrations.  It is also not recommended for areas that come in contact with water.

Least-Toxic Caulking – This uses more benign polymers such as acrylic latex, but leaves out most or all of the toxic additives.  These products are usually more tolerated by people who are chemically sensitive.

Expanding Polyurethane Foam Sealant Tape – Strips of pre-cut expandable polyurethane foam are manufactured with a self-adhesive back.  While polyurethane uses isocyanates, a potent asthmagen, in the case of tape, the chemical is reacted off-site in the manufacturing process.  Again though, this type of sealant has very limited applications, and is often used to seal around windows and doors.

Acrylic Latex Caulking – This caulk is based on a water-based chemistry using relatively benign synthetic polymers, though most conventional products have toxic additives that can be injurious to health.  Often mineral fillers make up the majority of it.

Higher quality products can last up to 10 years, can be sanded and painted, and smoothed and formed with a moist finger.  It has little flexibility however, and needs to be painted if used outdoors.  Most acrylic caulks will not adhere to metal.

Siliconized Acrylic Caulking – This class of product is a hybrid that mixes a small amount of silicone caulking chemicals with acrylic caulk to enhance adhesion to wet surfaces.  It is also water-based and paintable.

One-Component Silicone Caulking – Silicone sealants are generally made of an inorganic base of silicon and oxygen.  They also include mineral fillers such as silica.  However, a small percentage of silane chemicals with hydrocarbons are used as curing agents.  These have an unpleasant smell until it dissipates, and can contain reproductive toxins and endocrine disruptors.

Silicone is considered a higher quality product, valued for its flexibility and its endurance to extreme weather, UV radiation, mold, and mildew.  This also makes it valuable in humid indoor locations such as bathrooms.  However, many silicone products are unpaintable, and they are not water-based, so they require solvents to clean after application.

Silicone caulks cure quickly and can withstand rain almost immediately.  They adhere well to glass, metal, tile, and porcelain.  They do not, however, adhere to wood or (ironically) damaged, previously applied silicone caulk.

One-Part Polyurethane Spray-Foam Caulking – Canned spray-foam products are typically used to seal around building-shell penetrations such as window and doors.  All polyurethane products contain isocyanates, which are potent asthmagens and allergens, particularly for workers and chemically sensitive people.  These also include blowing agents, some of which are toxic.  And some can include toxic flame retardants.  They also require solvents for clean up after application.

Modified Polymer Sealant (STPE Caulking or MS-Polymers) – This product class, also known as “hybrid sealants,” uses modified polypropylene oxide as its base, combining the positive characteristics of silicon or polyurethane caulks without many of their problems.

It is: water-based (solvent-free); paintable; stain and dirt resistant; flexible; cures quickly; can be applied in low temperatures; is easily stored; and incredibly weather-resistant. It avoids isocyanates (potent asthmagens) needed in polyurethanes for curing.  It can be used with most construction materials, though it should be avoided on glass.

One-Component Polyurethane Caulking – As stated previously, one of the main chemical families that makes up polyurethane is isocyanates, potent asthmagens.  This solvent-based class of caulk is the more potent than can spray caulk.  The product is more dense than foam polyurethane and contains more isocyanates by volume, so it is considered a poorer environmental choice.

Polyurethane caulk, like silicone, is also considered a higher quality product because of its ability to withstand extreme weather, flexibility, and (unlike silicone) paintability.  Moreover, it also has the salient quality of being abrasion resistant, which is important for places such as floor joints.  It is difficult to install in cold weather.

Most products on the following page have been rated as Underwriters Laboratories‘ GREENGUARD Gold or Scientific Certification Systems’ Indoor Advantage Gold for VOC emissions at the time of publication.  AFM and Chem Link products are listed because they have a reputation for tolerance by the chemically sensitive.  However, they were not graded by ratings organizations.

Ingredients this author thought were of particular concern, found in Safety Data Sheets (SDS), were listed along with their hazards.  Some theoretically dangerous ingredients were not listed here.  For instance, crystalline silica, contained in some caulking materials, is considered a carcinogen if inhaled, but unless one breathes the dried dust frequently (e.g., occupationally), it will usually not be a major health concern.

Hazardous ingredients listed here are of concern to the author, but readers are encouraged to consult SDS and other information themselves if they are more cautious.  Chemical hazards are relative to many situations such as the degree of outgassing that has taken place, the percentage of ingredient in the product, and personal contact with the chemical over time.