As much as 62,000 square miles of the Continental U.S. are covered with turf grass, an area larger than the state of Georgia.25  The environmental affects are staggering.

• A 1997 study showed that lawns used 140% more pesticides per acre (including herbicides) than agricultural crops.27  These chemicals often evaporate to cause localized air pollution, or wash off into streams during rains.  They can also be tracked indoors, and are of particular danger to children and pets that play on turf they are applied to.

• Lawns use about 800 million gallons of gasoline a year to harvest their “crop” of grass with lawnmowers, about 1/4 of 1% of national petroleum use.  Unlike automobiles, pollution control devices on lawnmowers are very primitive.  In older mowers, they are non-existent.  In 2007, it was found that the hourly emissions of push mowers were equal to that of 11 cars.  The emissions of riding mowers were equal to 34 cars.28

• To understand the full magnitude of America’s lawn, consider how much food could be grown with this same land.  While different crops thrive in different climates, if America’s irrigated lawn area (59% of total lawn area) were concentrated in the Corn Belt, there would be enough land to feed 362 million people on a calorie basis.29

This grass crop is not without its redeeming features.  It provides scenic beauty, recreational area, increases property values, and mitigates the “heat island” effect in cities, where the sun’s heat is retained in buildings and streets to make cities hotter than the surrounding countryside.  (Cooler ambient temperatures lower air conditioning bills as well as the amount of ozone created in the atmosphere.)

Nonetheless, America’s collective lawncare is a huge contributor to chemical, air, and water pollution, and an enormous consumer of energy and water.  It also carries a staggering financial cost for materials, equipment and labor, and a considerable investment in volunteer time.

There are many things a consumer can do to save water used for lawn maintenance.  However, in droughts, it is consoling to remember that this is not an essential need. 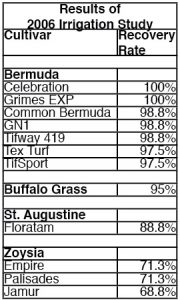 1. Type of Grass – Some species of grass are inherently more drought resistant than others.  There have been at least two studies for Central Texas to determine the most hardy varieties.

It is important to note that none of these 25 cultivars could recover when they were established in soil depth of 4 inches.  Deeper soil was needed to retain the moisture required for recovery.

The Williamson County Agricultural Extension Service conducted a study between 1997-2000 to measure drought survival rates of 11 different cultivars.  After 3 years, only 4 were able to survive without supplemental irrigation.32

It is comparatively expensive to replace an entire lawn with another cultivar.  Overseeding (if seeds exist) or overplanting bare spots may be an option, though different varieties on the same lawn will appear less uniform.  Starting a new lawn with the right cultivar, however, is much more economic and should be considered essential in new landscapes.

Another lawn option is Habiturf™.  This is a mix of native grasses adapted to the local climate, which includes extended periods with no rain.  The mix of Buffalo Grass, Blue Grama, and Curly Mesquite was developed and is marketed by the Lady Bird Johnson Wildflower Center.  These cultivars look similar, and create a thick turf that works well in up to 50% shade.

2. Type of Plants – Trees, plants, and turf native to Central Texas will often survive better without water than plants native to other U.S. regions and other countries.  Austin’s water conservation program began promoting “xeriscape” low-water use and native plants over 30 years ago, and they are incredibly easy to find at most nurseries and garden stores.

Low-water use plants for this region can be researched through the LBJ Wildflower Web site: wildflower.org/plants

Another great resource to plan xeriscape is the City of Austin Watershed Protection Grow Green Web site: austintexas.gov/department/grow-green-resources.  A lot of information is downloadable; hard copies can also be requested by mail.

A note of caution: replacing lawns and plants with rocks and rock gardens is not the most environmental option.  While this will save water, it also creates other problems.  Hardscape retains heat, adding to the heat island effect that makes urban areas hotter than the surrounding countryside.  To the extent that these hardscapes are close to buildings, they can be a direct cause of increased air conditioning load.

Rock gardens can also be difficult to maintain.  To keep a uniform appearance, undesired grass and plants must constantly be removed, often tempting homeowners to use dangerous herbicides.

3. Amount of Topsoil – The San Antonio study previously discussed analyzed the moisture level found in various depths of soil where grass was planted.  In all cases, the deeper the soil, the more moisture that remained in drought (though moisture level varied by the type of grass).

At least 6 inches of soil is the minimum needed for a healthy landscape.  As much as 18 inches is not out of the question.  The deeper the roots can go and the more moisture the soil can hold, the better your grass will look, and the less need for lawn maintenance you will have.

Adding half an inch of soil or compost twice a year is the best way to build up soil depth and still keep existing grass.  Too much soil at once will smother and kill the lawn.

4. Type of Soil – Good topsoil is paramount to water conservation and survival of lawns.   During the construction process for homes, much or all of the original topsoil is removed.  (In the Hill Country, there is usually not much there to begin with.)  What remains is often compacted by heavy equipment.  Many builders simply add a couple inches of soil and then attempt to establish a lawn.

Since the soil is shallow and the ground is not tilled or disked beforehand to allow good root penetration, grass on these poorly designed lawns requires frequent watering, and chemical fertilizers and pesticides are often used to make up for the lawn’s poor health.

Frequently, the soil that is added is “sandy loam,” nicknamed by some organic gardeners as “red death.”  It is generally orange-red or tan, dug from deep pits, and has virtually no organic or nutrient value.

Adding soil (or starting a new lawn) with material high in organic matter not only creates conditions for a healthy lawn, but reduces the amount of water necessary for it.  Austin is fortunate to have a number of good retail outlets and manufacturers of soil products and amendments to assist plants organically.  Though many retailers carry these products in small amounts, the retailers listed below generally have the best variety at volume prices.

These retailers also sell compost rated by the U.S. Composting Council for its Seal of Testing and Assurance (STA).  The STA rating scientifically verifies that pathogens and heavy metals do not exceed certain levels.  It also gives specifications for the make-up of the product, including ph, nutrients, stability, maturity, and percent of organic matter and moisture content.

Compost is often all that is needed in the way of fertilizer.  However, after a soil test, lawn owners may find that special nutrients are missing and add them.  These nutrients foster soil bacteria, which make the soil more friable, and allow water to better percolate into the ground.  Two testing labs in Texas are:

5. Amount and Frequency of Water – Grass does not need as much water as many homeowners use.  It is best to water once every 5 days during the growing season, and apply about 1 inch (as measured in a container near the irrigation system) at a time.

In shallow clay soils, it is best to water small amounts several times to allow water to percolate.  Otherwise, a considerable amount of irrigation can simply flow away as runoff.

In Austin, mandatory watering days are spaced 3 or 4 days apart.  Austin’s ordinary (non-drought) schedule for Residential watering (4 units per building or less) is easy to follow.  Watering cannot take place between 10 AM and 7 PM.

Exemptions (any time of day):

•  Trees using a bladder bag, soaker hose, soaker tape, or automatic tree bubbler in the drip-line of the canopy.

•  Watering with rain water, gray water, or other auxiliary water

6. Type of Water  – Virtually all municipal water systems in the U.S. are treated with chlorine or chloramine as a disinfectant.  While this is in many cases necessary to keep bacteria from building up in the water in pipeline systems, chlorine is a biocide that kills beneficial soil bacteria when used to water grass and trees.  Most U.S. city water supplies are also treated with fluoride as a (presumed) method of preventing cavities, which has also been found detrimental to plant growth.

This water, with its small amounts of chemicals, is not blatantly toxic to grass, plants, and trees.  However, rainwater, filtered water, and certain types of well water are better for long-term soil health   These alternatives usually carry cost premiums compared to municipal water supplies.

7. Irrigation Systems and Devices  – It has been proven that, as a rule, owners of homes with automatic irrigation systems use more water than those using a hose and sprinkler.  Many irrigation system owners do not know how to properly adjust the controllers.  Others may leave the system cycle on even after it has rained.

Bearing this in mind, several irrigation systems and retrofits exist to make automatic systems considerably more efficient.  Savings estimates can vary significantly depending on climate, soil types, plant type, brand and model of the equipment, and proper use of the equipment itself.  Some devices and technologies might work in concert with each other, though there will be diminishing savings for each new measure added.

Pressure Regulating Valves (PRVs) – PRVs are inserted into a customer’s plumbing to prevent misting and evaporation losses in irrigation systems.  This can occur when high water pressure sprays water at greater force than sprinkler heads are designed for.  By one estimate, they can save as much as 9% of the water in an average Austin home.33  Though PRVs are now required by the Austin building code for irrigation systems in new homes with high water pressure, most older systems do not have them.

Efficient Sprinkler Heads – Conventional sprinkler heads often have uneven “Distribution Uniformity” when they are broadcasting water to the zone they serve, leading to excess irrigation.  A relatively new design, Multi-stream, Multi-Trajectory Rotating (MSMTR) heads, compensates for this.  They can theoretically save about 31% of water compared to conventional equipment.34  These devices are now undergoing real-world tests.

Drip “Capillary” Irrigation – Drip irrigation for turf applies water directly to the root zone below the soil, and is virtually immune to direct water losses from evaporation and wind spray.

Tests of soil moisture sensors showed 20 to 40% savings.35  Tests of ET systems showed 16 to 60% savings compared to a standard controller.36  However, other ET tests have shown that some brands are not effective.  Moreover, in cities with limited watering days such as Austin, the hot, dry stretches of summer with little or no rain will provide limited opportunity for savings.

(These do not begin at #1 because this is from a longer article.)

25 Milesi, Cristina, et. al., Assessing the Extent of Urban Irrigated Areas in the United States, Remote Sensing of Global Croplands for Food Security, Thenkabail,P.S., et. al., ed., p. 229..  This is adjusted for percentage of Texas population in Travis County and then adjusted by 80% for irrifated acres.

33 Austin Water Utility estimates 25.8 gallons per day savings; compared to average home use of 100,000 gallons per year.  This assumes irrigation system is installed and employed.