Energy efficiency goes beyond installing efficient equipment and retrofitting buildings.  It also means modifying the electric system itself to be more efficient with conservation-based rates, smart thermostats, and efficient management of the distribution system.

On a broader level, energy storage located at the point of consumption is also important for a clean energy grid.  It allows the ability to save intermittent renewable generation for times when it is most needed while lowering electric bills, particularly for commercial customers.  It is also, in its own way, an energy efficiency strategy.

In the clean energy grid that is envisioned in this article, all strategies and technologies need to be employed simultaneously to maximize reductions in energy supply. 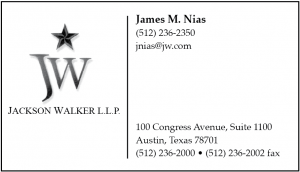 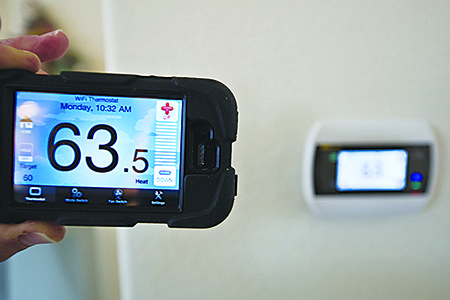 Wholesale electricity gyrates wildly by time of day and time of year.  At 2 in the morning in the spring, the cost per kwh can be less than 2¢.  Under conditions with surplus power, electricity can even have a negative price.  However, at summer peak demand at 5 in the afternoon, electricity can command a price as high as 9 dollars per kwh.

Time of Use Rates charge higher rates when power in more expensive.  In the Southern U.S., this is typically in late afternoon hours (e.g., 3 PM to 7 PM).  Lower rates are charged for “shoulder” hours (e.g., 7 PM to 10 PM and 8 AM to 3 PM).  Very low rates are charged off peak (e.g., 10 PM to 8 AM and weekends).  This discourages use such as air conditioning at peak demand, as well as discretionary uses such as washing machines that can be deferred to a later time.

Peak Time Rebates typically pay consumers for savings they achieve during peak hours given a certain baseline of consumption.  For instance, if a customer has a baseline of 20 kwh on a summer afternoon and uses 10, they would be paid a rebate per kwh for the difference.

Critical Peak Pricing alerts participating customers when high-priced events are about to occur in almost real time.  For instance, if a $9 per kwh charge is about to take place, the customer is alerted (via text or onsite display) to voluntarily conserve.  They are rewarded with part of the savings.

These rates are enhanced with “enabler” devices such as smart thermostats.  These thermostats can be controlled with WiFi to ensure coordination with peak rates, and can be programmed to “learn” a customer’s behavior to maximize energy savings.  Though they have customer override capability, the devices otherwise ensure more participation and boost peak savings to the utility administering them.  These rate strategies can save anywhere from 30 to 50% of peak demand per home.1 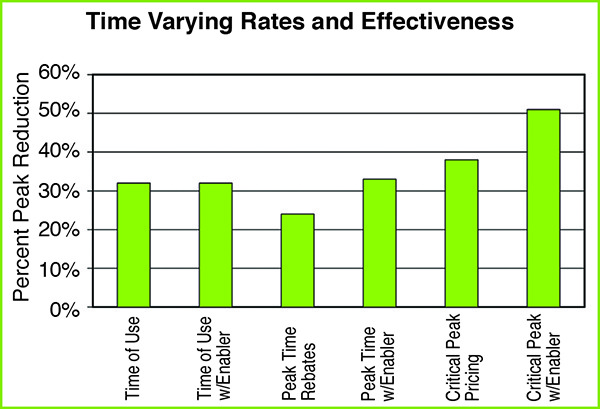 These strategies are designed to save expensive peak power and not electricity.  However, if implemented with enablers, they have been proven to save an average of 4% of total electricity.2

Austin Energy has been pursuing demand response for many years.  The utility had about 12,000 smart thermostats and 90,000 radio control devices attached to thermostats in its service territory in 2016, about a quarter of all customers.3  The utility estimated a peak demand savings from these installations to be about 97 MW in 2015.

However, Austin Energy had not assumed any substantial energy savings from this equipment.4  This is all to say that much of the energy savings potential from peak pricing rates, in conjunction with smart thermostats and other enabling devices, is still untapped.

Prepaid electricity rates require upfront payment prior to use, not unlike gasoline, groceries, and most other retail products and services.  In conjunction with the ability to monitor use on a daily basis, this strategy also saves electricity. Analysis of prepaid programs at various utilities has shown a range of 5 to 15% savings.5

Pay-as-you-go electric programs allow customers something that the utility industry has historically lacked, a convenient dashboard to monitor consumption and spending on a daily basis.  Prepayment also has economic benefits for non-participating ratepayers by reducing the overhead of the utility.  Bad debt and interest, as well as administrative expenses associated with delinquent accounts, are reduced.

Prepaid electric programs are a growing national trend in the U.S., and are common in a number of other countries, including New Zealand, Northern Ireland, England, and South Africa.6

Some consumer advocates abhor prepaid programs because they consider them onerous to people with lower incomes, which often make up the majority of participants in prepaid programs in various utilities.  There are actually several advantages to poor consumers, though the issue is not black and white.

Prepaid programs allow service without security deposits or credit checks.  While this often benefits low-income customers, it can all-but-force some disadvantaged participants into prepaid programs, even when the customers would prefer other options.

Alerts by phone, text, and e-mail are given when accounts run short of money to prevent disconnection.  However, in the event of disconnected service, unlike conventional billing, there is no penalty to restore power, and some utilities can remotely reinitiate the connection in as little as an hour.  Further, the service can be structured to prevent cut-offs during times when service cannot be restored quickly, including weekends and holidays.

Another benefit is for customers who have already been disconnected from conventional service.  It allows them to deal with their past balances in a paced manner.  Rather than be prohibited from reconnection until part or all of the past balance is retired, prepaid options allow immediate reconnection, with some lesser portion (e.g., 25%) of the prepayment going toward the delinquent balance.

Surveys of customers on pay-as-you-go rates have been overwhelmingly positive, and this includes low-income ratepayers.  However, there is a contradiction that is hard to reconcile.  In some surveys, about 40% of the prepaid customers will sometimes voluntarily disconnect to stay current on their bill.7  Perhaps because the service is a choice rather than a requirement, they still give the service high ratings.

Prepaid programs can also be a burden to customers if transaction fees are too high or take place too often.   Strategies to keep transaction fees to a minimum (checks, payment windows, bank drafts) will be essential to make this payment strategy equitable.

If prepayment achieved a 20% voluntary participation rate for Residential and Small Commercial customers served by Austin Energy, and assuming a 12% average electric reduction, it would result in a system-wide benefit to Austin Energy of 0.9% total consumption.8  (Prepayment is unlikely to save energy for large commercial customers.)

If prepayment were mandatory, and the savings were the same for the average customer as what they are for voluntary participants (an unproven supposition at this point), it could have an overall savings of 4.4% of Austin Energy’s total consumption.

Though these voluntary rates are popular, some consumers would resent having this option forced on them.  Political feasibility may be lacking.  However, high participation rates might be necessary to achieve maximum efficiency that a completely renewable electric system requires.

Delivering electricity through the transmission and distribution system results in power losses.  Though it differs by each situation, electric utilities routinely assume that 6 to 8% of electricity from a power plant is lost before it reaches the customer.

One large source of these losses comes from excess voltage in the distribution system.  In the U.S., equipment is designed to run at between 110 and 120 volts. However, utilities typically dispatch electricity at the beginning of a feeder circuit at higher voltage to compensate for “end of the line” voltage sags.

For certain end uses, there is no electricity wasted if the voltage is higher than necessary.  For instance, strip heating and incandescent/halogen (filament) light bulbs simply emit more heat or glow a little brighter.  However, in appliances such as refrigerators and HVAC, the motors run slightly faster, wasting electricity in excess of what is needed.  (This also creates excess heat, which adds to air conditioning use if the motor is inside a building.)

The required voltage changes by the season, day, and even time of day.  Conservation voltage regulation (CVR) optimizes voltage to what is required throughout the year, reducing electricity both at peak demand and annual consumption.  Annual savings on feeder circuits where voltage regulation is implemented are typically in the 2-3% range.9  Some of this savings occurs on the customer’s side of the line.

There are several technological approaches to achieve CVR.  In Austin’s situation, a software platform utilizes measurements from the field devices and simultaneously runs a system load flow model to optimize operation.

Austin Energy is in the formative stages of implementing this strategy.  It plans CVR for 127 of its highest use feeder circuits.  In early 2016, 19 of these had already been converted.  The cost has averaged about $31,000 per feeder, with a payback of 4 years from energy savings.10 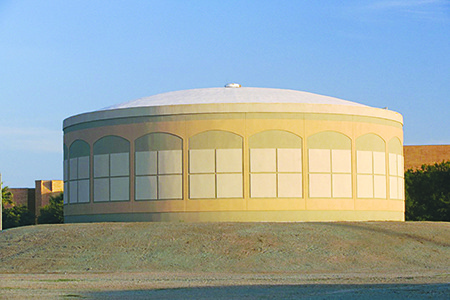 Thermal energy storage (TES) is the most cost effective storage technology at this time.  Cold water, ice, and hot water are charged with renewable or cheap off-peak electricity and stored in tanks at the point of use.  Utilities typically offer special rates to encourage off-peak use, allowing TES customers a way to recoup their investment while lowering system demand.  Almost all customers that take advantage of these rates for air conditioning savings are in mid-to large-sized commercial buildings because of their use of peak metering, and the operation and maintenance involved with these systems.

At the time of printing, Austin Energy’s highest historic peak demand was on August 13, 2015 at 2,735 MW.  Its lowest demand that day was about 1,578 MW.11  Theoretically, this entire gap could be used to store thermal energy for peak use.  Yet TES deferred only about 34 MW of demand in Austin in 2016.12  This includes 3 district chilling stations that serve clusters of buildings.  So Austin’s TES potential has barely been used.

There are energy losses associated with even the best insulated storage containers.  This is partially or fully compensated by: 1) creating the stored cooling at night, which increases HVAC efficiency because of cooler night time air; 2) preventing peak demand generation, which is less efficient; and 3) lowering the need for peak transmission, which is also less efficient because of more congestion, requiring more electric production for the same amount of demand.

No study of energy storage losses and gains (and their effect on carbon emissions) has ever been done for the Texas ERCOT system.  However, due to its ability to store intermittent renewable energy, TES should be evaluated for its potential as an essential component of a clean energy grid.

Continue to A Map for Clean Energy in Austin->

3 Information response from Austin Energy on November 3, 2016.  Count of radio devices is dated.