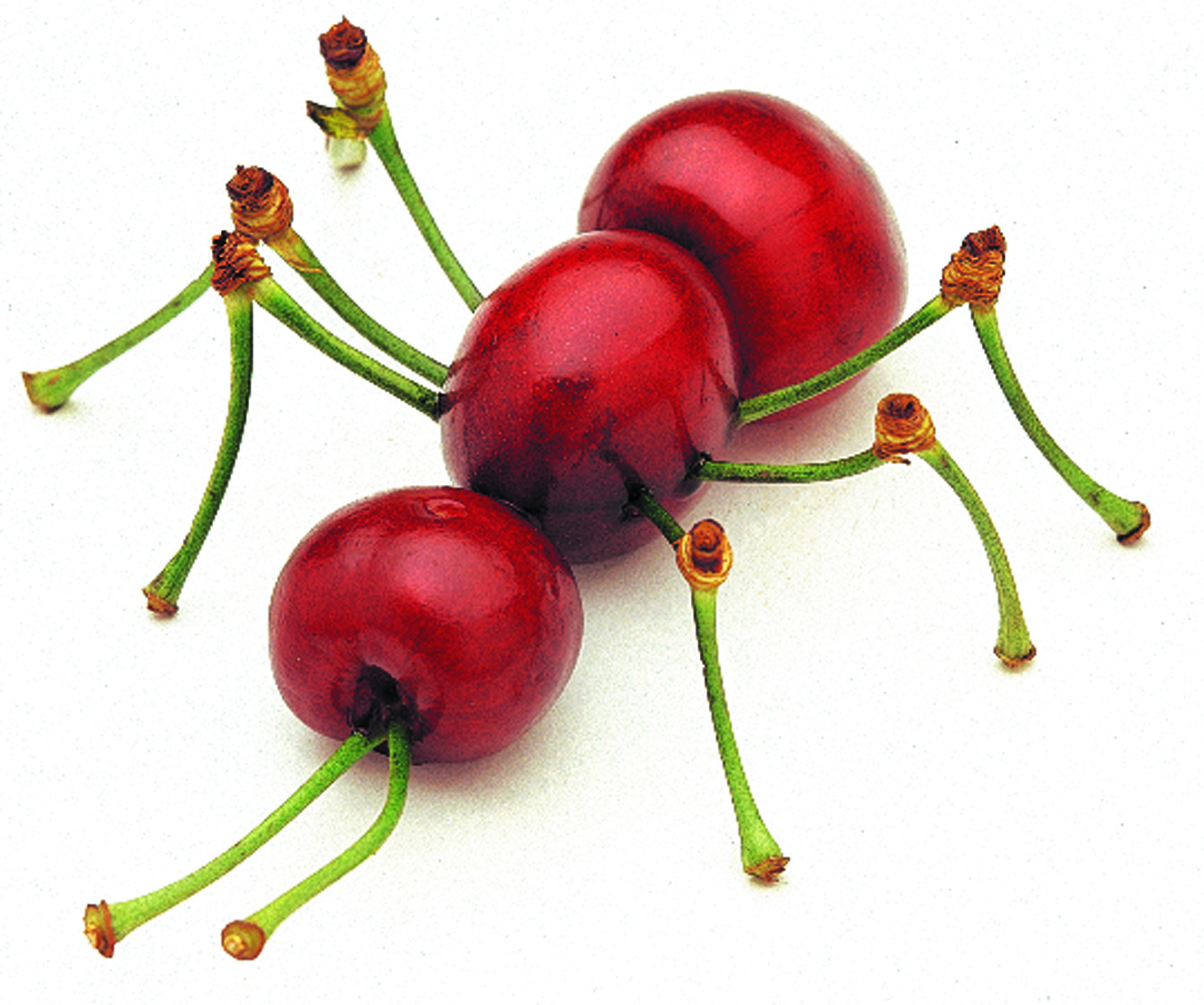 Critics of organic food often use the argument that since the residues are so minute, the dangers from conventional pesticide treatment are inconsequential.  This greatly oversimplifies that debate.

1. Many hazardous ingredients in pesticides are not measured for residues.

“Inert” or “other ingredients” including toxic solvents and adjuvants that make pesticides more lethal make up anywhere from 0 to 99.9% of a retail product.  In 2014, a French study on the hazards of various pesticides on human cells proved that the whole products, including solvents and adjuvants, were, on average, several hundred times more toxic than the limited residues of active ingredients they were tested for.1

When pesticide restrictions are set by the U.S. federal administrative process, the thresholds of harm are estimated by human exposure to one active pesticide ingredient at a time.  In the real world, several pesticides can be applied during different cycles of a food crop’s cultivation, with multiple measurable residues upon harvest.

Not only can these harmful pesticides be additive, they can also be synergistic, with a pesticide “cocktail” being more potent and damaging than the original ingredients themselves. 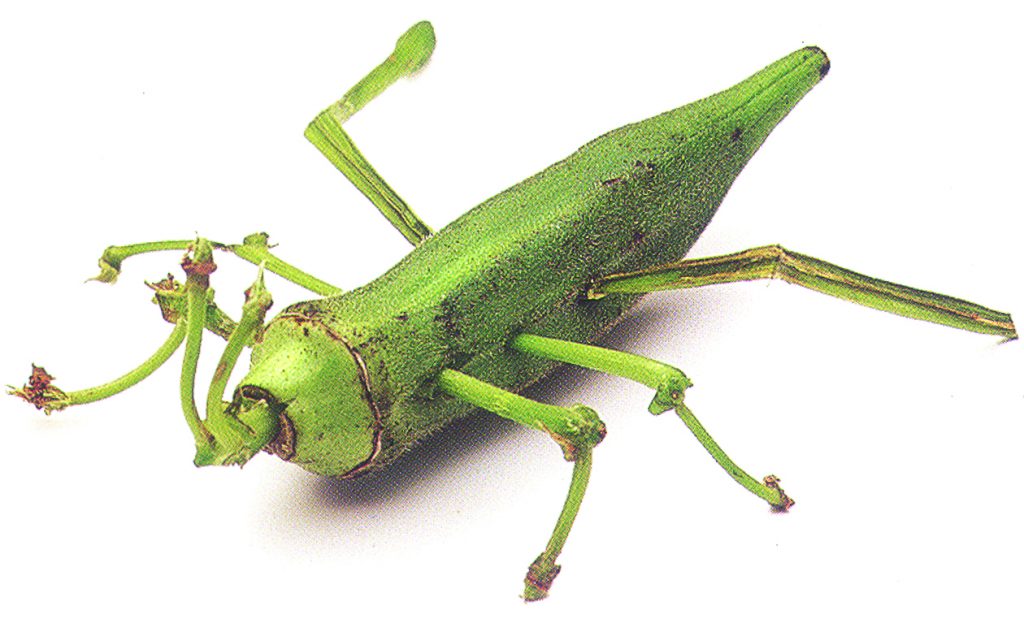 Saxton Freymann ©Play With Your Food LLC. Used by permission.

3. Current Limits Do Not Reflect Harm from Endocrine Disrupting Chemicals.

That pesticides cause acute and chronic harm at certain thresholds is beyond dispute.   These products cause illness from extreme exposures, and chronic diseases such as cancer, when exposed to elevated levels over a period of time.  However, even much smaller doses can affect the endocrine system, contributing to related diseases and maladies such as asthma, diabetes, obesity, heart disease, infertility and reproductive problems, and learning disabilities in children.

Unlike acute poisoning, human hormone interactions take place at levels in the parts per million, billion, and trillion range, similar to what can be found in pesticide residues on food.

4. Pesticides add to toxic exposure from other sources.

In the toxic world we live in, exposure to pesticides in food is added to exposures to toxins throughout the environment: air and water pollution; pesticides used to treat buildings and landscapes; and toxins in building materials, clothing, furniture, and personal care products.  Avoiding pesticides in food limits the cumulative “body burden” of poisonous substances to which people are exposed.

In 2017, about 32% of the fresh vegetables and 55% of the fresh fruit were imported.1 The U.S. Food and Drug Administration also conducts an annual residue monitoring program.  To some degree, the program concentrates on foods and countries that have repeated violations.  Thus they are not statistically valid.  Still, it is alarming that in 2017, the violation rate for samples that exceeded tolerance was 3 times higher for foreign food products than domestic ones.2

The following imported foods had high rates of violations.  While not every product from every foreign country is suspect, the high rates for certain imported products provide another reason to buy American and buy local. 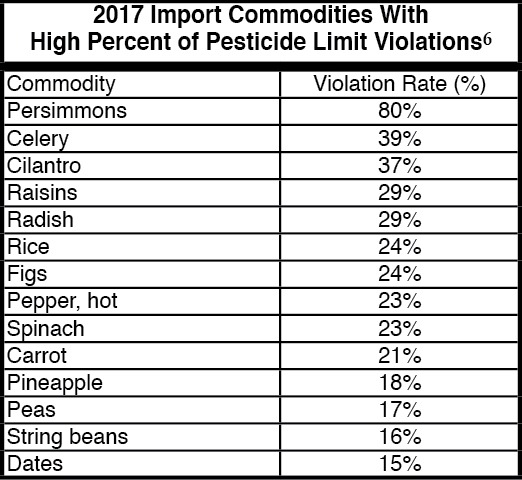 Saxton Freymann ©Play With Your Food LLC. Used by permission.

5. There are outright violations of pesticide limits.

Even if you take the allowable residue limits the government administers at face value, and ignore the valid problems with them discussed above, there are violations.  In 2018, the violation rate of federal pesticide tolerance limits on produce sold in the U.S. was 0.8%, and detections of pesticides with no established tolerance was 6%.3

This is all in addition to the more direct harm that befalls people that live in agricultural areas or that work in pesticide-related professions: farmers and farm workers; horticultural workers; people that live near farms exposed to pesticide “drift;” and pesticide applicators.  Children and pregnant mothers carrying children can be exposed directly, or when family members bring home pesticide residues on their work clothes.  Pesticides can also affect groundwater and municipal water supplies in agricultural areas.

Avoiding Food Pesticides on a Budget

There are at least two strategies that can allow you to stretch your food budget farther and still avoid some if not most of the pesticides you are exposed to with conventional foods.

The first is to buy organic food selectively. Not every kind of produce accumulates pesticide residues at the same rate. Leafy vegetables such as spinach and kale, and soft fruits such as strawberries, cherries, and apples have higher average residues than crunchy vegetables like broccoli and cauliflower, as well as melons and pineapples.

Every year, the U.S. Department of Agriculture conducts pesticide residue tests on samples of produce. Several organizations have analyzed these tests to determine the relative contamination of different kinds of food.

The most current ranking of this kind is the Shopper’s Guide to Pesticides in Produce by the Environmental Working Group.1 The group divides the worst offenders (“The Dirty Dozen”) from the least-contaminated varieties (“The Clean Fifteen”).

The 2020 rankings are listed here, though these are generally updated annually each spring, and accessed on the Web site: www.ewg.org. 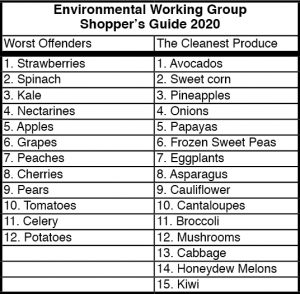 A second strategy goes further than simply washing food. While one should always wash produce, the effectiveness of many retail food-wash products at reducing pesticide residues any better than plain water lacks proof. However, a 2017 study from the University of Massachusetts proved that soaking apples in baking soda mixed with water (1 teaspoon to 2 cups) was effective at removing 2 different pesticides from the surface of apples in time periods of 12 and 15 minutes (depending on the pesticide).2 The effectiveness of this technique is not universal. Some pesticides are systemic, and this baking-soda method could not go past the surface of the fruit in removing them.